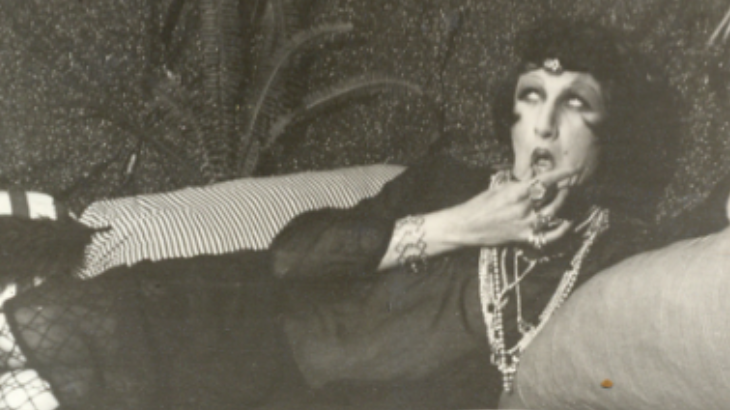 In his first short film, Óscar Alves experiments with the flashback-based narrative structure and the theme that would be further explored in his later work Aventuras e Desventuras de Julieta Pipi, filmed with greater means.

Shot with no dialogues or sound effects, the film relies on intertitles to convey the essence of the dialogues, and it requires greater rhythm and expressivity from its actors; to this end, Alves recreates the expressionist aesthetics of silent cinema.

The time and setting of the action are revealed immediately: 1930, the Chalé das Águas Correntes (Chalet of Running Waters). Epifânea Sacadura (Fefa Putollini), actress, welcomes us with a “Hello, Boys!”; lounging on her chaise longue in a languid pose; she even fondles herself on occasion. Epifânea is clearly bent on seducing the boys. The actress speaks of her career; she tells the story of the making of a film, in which we see her character receive the visit of a gentleman that turns out to be a vampire.

A situation she resolves by immobilising him through a “Bottled Fart” she had handy. She then produces a king-size hammer and stake to get the job done. Epifânea confesses that life in the movies has made her into “a drunk, glutton, and neurotic”, and then recounts one more recollection: the filming of “Última Valsa em Cucu” (“Last Waltz in Booboo”). A beach stands in for the desert that serves as the backdrop for an exotic story; the actress, in a shell bikini, crawls into the arms of the leading man. On set, the actor turns out to be a real gentleman, helps Epifânea when she is bitten by a spider, and even gives her a manicure. The actor only looses his stride when Epifânea pulls his tunic up, and screams, “Not in the ass!” The film ends with a commercial for the “Vaqueiro” brand of margarine - “Even in the desert, a little “Vaqueiro” comes in handy” -, in a sequence that is a clear reference to Bernardo Bertolucci’s Last Tango in Paris (1972).