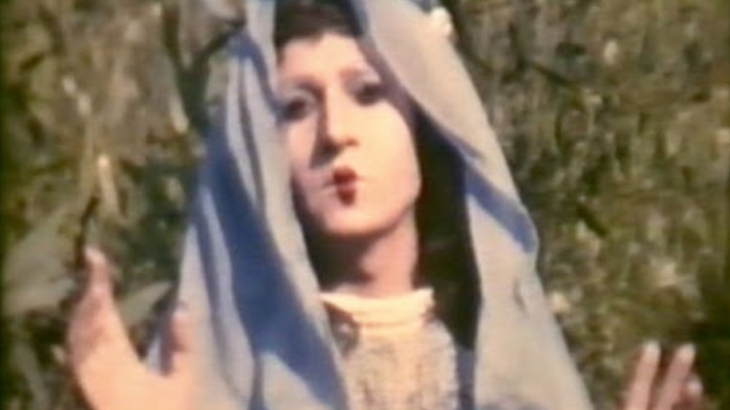 The oeuvre of João Paulo Ferreira, which began in 1975, generally had a strong focus on social and political issues, he directed this singular work, Fatucha Superstar, in a musical style inspired by Andrew Lloyd Webber’s production of Jesus Christ Superstar. With the Portuguese revolution of 1974 still fresh, Ferreira deconstructed one of the greatest pillars of the dictatorial Estado Novo regime: the apparitions of Our Lady of Fatima. If, on the one hand, Fatucha Superstar is faithful to the hippie aesthetic of Webber’s musical – and to a Portuguese generation of the time – on the other, Fatima, or Fatucha, is a sophisticated transvestite that appears to the three little shepherds in dark glasses and a convertible.

The film begins with images of pilgrims in Fatima. But, in spite of this documentary style introduction, João Paulo Ferreira asks us to revisit the myth, revealing to us his own truth about it. In an open, deserted field, the three little shepherds, Lúcia, Jacinta and Francisco dance with unfettered gaiety, until Jacinta (with a hairy moustache) has a premonition. But it’s to Francisco that Fatucha appears. The boy immediately calls his sisters so they can also witness the strange phenomenon. Fatucha sings to the little shepherds, promising them fame and success in the future. But Francisco, more than inebriated by these promises, falls in love with this fascinating woman, to whom he dedicates, in bucolic ecstasy, this song: “I feel my head turning around, / the bosom, corset, / I can’t forget that broad, / she is hot as hell...” Then comes Fatucha again, also in a solo, promising to begin her struggle, not without consulting first with God, who thus reacts to her proposal: “What debauchery ...” When Fatucha appears again to the little shepherds, the miracle begins, in the form of magician’s tricks. She makes a table appear, takes objects out a top hat, makes orange juice appear to quench their thirst, and transforms Jacinta into an appealing woman. But something goes wrong when she makes Jacinta disappear, leading her siblings to chase her away. Fatucha runs to her car and tragedy looms. As a new Isadora Duncan, her veil gets caught in the car wheel. Fatucha seems to have left us.

Halfway into his reinterpretation of the apparitions, João Paulo Ferreira interrupts the narrative with an insert – announced by psychedelic lighting effects –, that brings us to the present. On a dance floor, angels, nuns, and God dance without shame. The characters in this fable give themselves up to the most earthly and carnal desires. On an altar in the background, instead of a religious figure, there is that other, rather more pagan, cult object: an enormous phallus. At the end of the film, there is a new return to the present time. A group of friends celebrates Fatucha. She isn’t dead after all. In a final homage, they sing in unison: “Oh Fatucha Superstar, why are you fooling the people. / Oh Fatucha Superstar, beware that they will screw you in the end”. João Ferreira