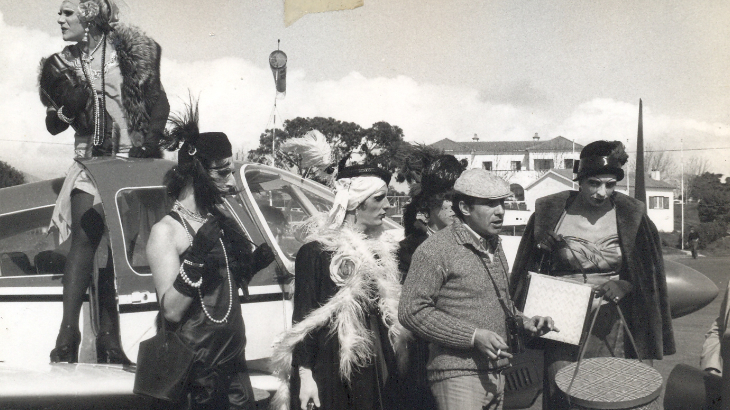 The last film directed by Óscar Alves, Good‐Bye, Chicago was devised to open the show of the same name at the Scarllaty Club in 1978. The film is therefore the fictional version of the perilous events of the weeks that preceded it, events that resulted in the show which the audience was about to see live on stage.

Filmed with no sound, Good‐Bye, Chicago opens with the landing of a private plain at Tires airport, in Cascais; its three passengers, acclaimed by a multitude of fans and many photographers who invade the landing strip, are three divas. The three vie for the attention of the photographers, striking various poses, and even resorting to physical aggression in order to gain the spotlight. The diva played by Guida Scarllaty receives luxury treatment: she is whisked off towards Lisbon in her own convertible, with her puppy and a bottle of champagne in hand.

When her car breaks down, she is forced to accept a ride from her “rivals”; the three squeeze in the back of a much more modest car, with their legs and wigs sticking out of the car windows during the trip. The following sequence, showing a firemen’s car and a body lying on the road, suggests what is soon confirmed by the insert of a newspaper headline, announcing the death of the divas in an accident. Except for the character played by Scarllaty... Soon returning to work, she organises a casting session for the show Good‐Bye, Chicago. Several female transvestites and a male one (Tony, played by Maria José, who was also part of the show’s cast), receive an invitation in the most unexpected circumstances: while shooting a film, during a moment of intimacy, or even on the operating table, while undergoing surgery. For this specific segment, Óscar Alves also used a sequence which parodies the theatre play A Verdadeira História de Jack, o Estripador (1977), playing in Lisbon at the time and staring Ana Zanatti and Zita Duarte. In the final sequence, all are reunited at the Scarlatty Club; the film ends, and Good‐Bye, Chicago begins. João Ferreira