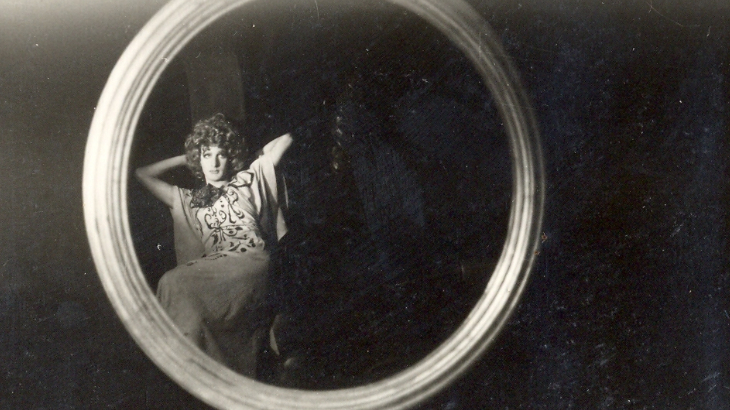 Solidão Povoada, the first feature‐length film by Óscar Alves, and the only melodrama in his brief directorial career, is a legitimate heir of the visual aesthetics of the Cinema Novo, whose main reference is Verdes Anos (1963), by Paulo Rocha. Set in Lisbon after the revolution of 25th April 1974, a city that aspires to be cosmopolitan, the film portrays two middle‐class couples, played by Domingos Oliveira, Carla Tuly, Fernando Silva, and Isabel Wolmar. In the first scene, we are introduced to the relationship between the main character (whose name we will never learn), and Fernando. We are in the former’s apartment in the Amoreiras area, and Fernando calls him from a phone booth. In the car, driving towards Monsanto, the protagonist recalls his break‐up with former girlfriend (Carla Tuly), in a flashback where the two are seen, in a theatrical setting among the ruins of the Carmo convent, going their separate ways. In another flashback, he recalls how he met Fernando, on the day he visited the glass factory the latter manages with his wife (Isabel Wolmar), to place an order. The main character seems to have already accepted his homosexuality: before dining alone with Fernando for the first time, he takes leave of the transvestite (Belle Dominique), in the latter’s dressing room. He tells her that he cannot attend her show, thus stating the end of a relationship that despite being “necessary” had no future, since he actually despises the world she inhabits. After their first romantic dinner, the two men sleep together. At Fernando’s, his wife awaits long into the night for his arrival, upon which she embraces him and the two make love. In a voiceover, we hear Fernando comment, “All this is a farce”, while remembering his male lover, naked, sitting on a rock in Monsanto. This flashback suggests that the relationship has progressed, and that the two did not just share the one night after the dinner; they have been lovers for a while. Solidão Povoada seems to aspire to signal the growing divergence between pre‐revolutionary Portugal, and a new rising frame of mind. In a meeting at an antiquarian, the main character and his former girlfriend go shopping together, as friends, and her words express tolerance towards his sexuality. Fernando, on the other hand, remains in his marriage. In the final sequence, we see images of Lisbon, full of anonymous passers‐by, while each of the four main characters walks alone; they eventually meet, but do not know (or recognise?) each other. Four realities that crossed in a Lisbon under transformation. João Ferreira