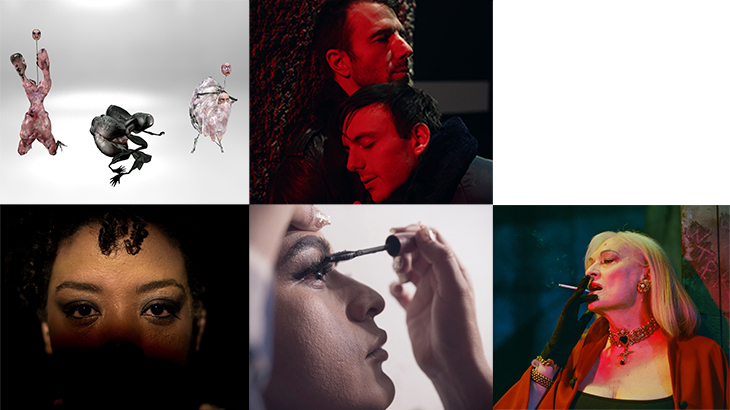 Despite the persistence of restrictions due to the Covid-19 pandemic, the lifting of some of these measures allowed the festival to welcome over 40 guests, a significant part of which were international, traveling from Egypt, Argentina, Sweden, Brazil, Spain, France, among other countries; this allowed us to celebrate once again the dynamic of our film festival, which is based on a strong idea of ​​community.

Compared to its previous edition, and despite the same restriction of a maximum of 50% of theatre occupancy for this year's edition, Queer Lisboa 25 had an increase of over 25% of spectators compared to the previous year, with a total figure of circa 5.000 spectators at the Cinema São Jorge and Cinemateca Portuguesa screenings and parallel activities.

Best Film: Minyan, Eric Steel (USA, 2020, 118’)
“Minyan is a complex object and at the same time a prodigious exercise of subtleness and coherence, giving voice to diverse means of belonging and identification. Eric Steel’s narrative feature debut is on point and elegant, and Samuel H Levine’s contained performance takes us to a place of deep empathy and commotion”.

Special Mention: To the End, Glenda Nicácio, Ary Rosa (Brazil, 2020, 94’)
“Under the guise of an apparent technical simplicity, and drawing from a rather more theatrical than cinematic narrative structure, Até o Fim experiments on an intimate and honest portrayal of solitude, parting, and the outcome of four black women whose lives are met with abuse, homophobia, transphobia, and machismo. This is a touching document and an honest contemplation”.

Best Film: The Night Flowers, Eduardo Esquivel, Omar Robles (Mexico, 2020, 85’)
“Social constructs are intrinsically linked to both political and economic geographies, so as to the given perceptions on what it is to be and to live as an LGBTI individual. From Mezcala to Queer Lisboa, the documentary Las Flores de la Noche takes us to a fascinating reality aesthetically wise, while it also outlines the toughness of everyday life, and at the same time recalls us of the strength of personal and communal transformation that resides in our bodies, identities, and our concept of freedom”.

Special Mention: Sediments, Adrián Silvestre (Spain, 2021, 89’)
“Both the intimate and the political disclose themselves through a gesture established by proximity. Sedimentos brings to surface the disputes that anticipate the construction of a speech that triggers a battle that is both urgent and ongoing. We were touched to discover this in a space that is as tender as it is a true foundation for utopias”.

Best Film: Dazed Flesh, Ricardo Alves Jr., Grace Passô (Brazil, 2019, 45’)
“A film that convokes us to a visceral experience of the incorporeal forces that (re)move possibilities of relation through and beyond re-cognition. A delicate exercise in the performative transposal of a theatrical piece into a cinematographic work, in which all the elements contribute to making visible and sensorial the effort needed in order to make something that is beyond reason be recognizable by human experience, which is so marked by both the potentiality and limitations of body-matter, visuality and language”.

Special Mention: Hi, Sweety., Celeste Prezioso (Argentina, 2020, 30’)
“For the act of love between the filmmaker and her subject, and for the way she tells her story, inviting us into an intimate space of sharing”.

Best Film: Scum Mutation, Ov (France, 2020, 10’)
“An urgent manifest with a bold and disruptive scenic device that is not afraid to voice a stand, and which roots an idea of revolution through a voyage of image and sound, both embracing and instigating us at the same time”.

Special Mention: Jo, Ann Sophie Wieder (France, 2020, 30’)
“For having found a film in such a valuable testimony by a protagonist that uses filmic gesture as a means of survival”.