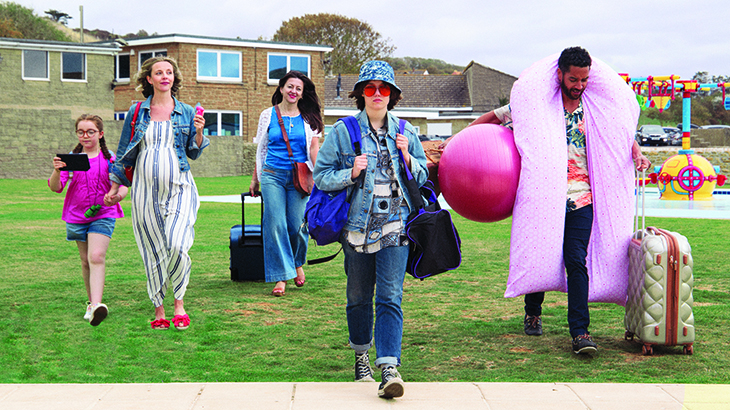 After a year marked by an out-of-town program that took the Porto and Lisbon Festivals to several locations outside the major urban centers, Queer Porto returns to its hometown for an edition that expands its programming to new spaces, such as Teatro Helena Sá e Costa (ESMAE). The usual Teatro Rivoli, Reitoria da Universidade do Porto – Casa Comum and Maus Hábitos, will host the remaining program of an edition that will be multiplied by special screenings, conversations and parties, and which will make us reflect, again, on the important issues related to to memory, individual and collective.

In the Official Competition, Nelly & Nadine is a highlight, the documentary that won the Teddy Award for Best Documentary at the Berlinale this year portraying an unusual love story between two women who fall in love on Christmas Eve, in the Ravensbrück concentration camp. Also: La fin de Wonderland, a documentary about Tara Emory, a transgender artist who works by her own rules in the sex industry; Un Varón, which comes directly from the Directors' Fortnight of Cannes, and which leaves a powerful comment on the concepts of masculinity in Latin America, through the story of Carlos, who lives in a shelter for minors; or Rua dos Anjos, a film built from the encounter and the filmic creation shared between Renata Ferraz and Maria Roxo, as they exchange experiences of their respective crafts: film and sexual work. The jury for this competition will be composed of French journalist and activist Cy Lecerf Maulpoix, RTP television producer Isabel Roma and director João Vladimiro, who will evaluate the eight titles in the competition.

The films integrating the program of th Casa Comum Award - which, as of this year, includes the In My Shorts Competition for Portuguese school short films -, present a contemporary view on issues around identity and gender, by a group of artists whose aesthetic languages ​​show us the present place of national cinematographic creation, in the form of a short film. Pedro Neves Marques returns with Tornar-se um Homem na Idade Média, raising the question of the possibility of artificial pregnancy in the male body; Aos Dezasseis, by Carlos Lobo, focuses on individual identity construction during adolescence; in João Gabriel - The Last Day of Summer, Bernardo Nabais stares, in a documentary way, at the motivations of the plastic artist that lead him to paint through pornography inspiration; while Azul, Ágata de Pinho's directorial debut, opens the dimension of catharsis from a liminal state of existence. There are still four more films in this program, whose jury will be composed by the researcher and collaborator of CETAPS Joana Caetano, by filmmaker José Paulo Santos, and by the artist and founder of Livraria Aberta Paulo Brás.

Queer Focus returns to the Casa Comum (Reitoria da Universidade do Porto) and promise to give continuity to a theme that the festival took this year to the Nice, France, as part of the Saison Portugal-France 2022. The theme of ecosexuality has been consolidating itself in our programming in recent years, and has threw a new light on contemporary queer issues in their relationship with nature. This year, under the EcoQueer motto, this strand will include, among other films, Blastogenesis X, an experimental exercise that deconstructs any and all boundaries between the human and the animal; Haldernablou Quadriflore, a feature film between dance and poetry, and under a mystical performative setting, where Tom de Pékin adapts Alfred Jarry; and Metamorphosis, a proposal by The Institute of Queer Ecology that, based on animal behavior, imagines strategies for the foundation of a multispecies utopia, and whose projection will be followed by a talk with the journalist and queer climate justice activist Cy Lecerf Maulpoix. The exhibition of the first part of Three (or More) Ecologies: A Feminist Articulation of Eco-Intersectionality juxtaposes the reflections of prominent proponent of women's labor rights Silvia Federici with the discourse of populations threatened by fracking, followed by a talk with Stephan Dahl, founder of The Quinta Project, in Marvão, and eco-feminist Griet Pauwels. This section opens with Uýra - A Retomada da Floresta, a look at the reconciliation of indigenous and trans identities, and the closing film will be Water Makes Us Wet: an Ecosexual Adventure, a journey around water and the practice of pioneer echoqueer artists Annie Sprinkle and Beth Stephens, which involves environmental education, besides dealing wiht rite and expansion of sexuality issues.

As the Closing Film for Queer Porto 8 we present Les amours d'Anaïs at Teatro Rivoli, the latest fiction by Charline Bourgeois-Tacquet, starring the magnetic Valeria Bruni Tedeschi and telling the story of a restless young woman and the love triangle awaken by her deep desire.

And, in a partnership with ESMAE, Teatro Helena Sá e Costa will host one of the most awaited special sessions of this edition: the Brazilian documentary Máquina do Desejo - 60 Anos do Teatro Oficina, by Joaquim Castro and Lucas Weglinski, a powerful look at history of this São Paulo theater company, followed by a talk with the filmmakers.

At Teatro Rivoli, there will also be space, out of competition, for Esther Newton Made Me Gay, the most recent documentary by Jean Carlomusto, in which the American director reveals the rich complexity of this important anthropologist and activist proposals within the construction of queer communities and their identities, while showing us how these constructions are the result of the intersection and transversality of different worlds, experiences and geographical origins.

And in Maus Hábitos, another film out of competition: the documentary Blitzed: The 80s Blitzed Kids Story, which celebrates the sounds of the New Romantics and their key contribution to queer aesthetics and culture.

Still at Maus Hábitos, space for the already famous Beyoncé Fest, and also to celebrate the end of another edition with Closing Party Makes Us Wet, the closing party that will feature some of the hottest names on the city's dance floors, such as NOIA, Catxibi and Phaser. The beginning of the Festival is celebrated, a few days before, in the new Bar of Soap, with a Queer Mixer where we'll toast to inaugurate the Festival. It promises to be an auspicious starting point for these six days of the best international queer cinema.